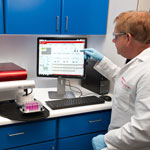 In fall of 2015, James Gossard added onto Superior Laboratories/Heavenly Gardens plant ploidy testing. Initially to test Daylilies used in his hybridizing program. Currently the daylily is the most hybridized flower or plant in the world. Over 2,000 new hybrids per year, many more than any other plant. Thus making James one of the top Plant breeders in the world. Heavenly Gardens grows over 50,000 seedlings per year and introduces around 70 daylilies per year. Currently James has introduced over 840 registered daylilies. Many of have received national awards, the highest being for Heavenly Angel Ice It won the 2013 Stout Medal, the 2009 Lambert Webster Award and Awarded Honorable Mention in 2007 by the AHS. In addition, 42 of his other daylilies have won major awards. The hybridizing program is located in Galloway, Ohio where both Heavenly Gardens and Superior Laboratories is located on the same property. Our second hybridizing program is located in Florida Spacecoast Daylilies with his partner, John Kinnebrew, which is an amazing hybridizer and he too has won many national awards. James also is well known for breeding Red Standard Poodles and Irish Doodles known as Heavenly Poodles and Heavenly Doodles in Galloway, Ohio. James background is that he is a graduate of Ohio State University with a degree in Microbiology and Registered Sanitarian, state of Ohio. He currently is laboratory director/owner of Superior Laboratories Inc. Which is a food, plant, water and environmental testing laboratory.